On 17 November 2009 PressCom was awarded the “Press Officer of the Year” Award by the International Association of Journalists, backed by the Ministerial Council and by the Foreign Ministry

This award came as a result of the partnership with Goldlake, a company owned by the Colaiacovo family from Umbria, market leaders in Italy for the extraction of gold in a sustainable way.

A project that has socially and ethically responsible gold sourcing at heart and PressCom was appointed to handle international media relations.

The prize was awarded for the following reason: “for bringing this story to national and international attention and, in particular, to The Financial Times, the first business daily title in Europe.”

This is the prize and, below, the group photo: 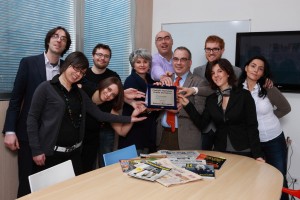 Edison Generation, the Edison’s web community created by our partner  e-Xtrategy  in partnership with PressCom, won the Aretè 2010 prize for responsible communication in the internet category. A great result, which was followed by an invitation in February 2011 to Luiss, to ​​talk about the experience. At the “Management Development” talk show, Michele Luconi, president of e-Xtrategy, presented a report titled “Companies, people, and social media. It is not easy, but it is feasible”, a talk show aimed at managers and entrepreneurs, focusing on how to use social networks as a tool for self and business promotion.

Edison generation, www.edisongeneration.it,  deals with issues linked to corporate social responsibility, it is a web community that gathers news on sustainability in one place, it features stories about sustainable projects and makes use of social networking for people to compare and to get ideas.

In 2008 Fabio Lo Savio and Luca Lorenzetti  released their book  ”Comunicare ai media. L’ufficio stampa nell’era del Web 2.0” (How to communicate to the media. The press office in the Web 2.0 era)  and PressCom features in the book.

Fabio and Luca have written a book that can also be seen as a manual for all of those wishing to approach the profession of press officer and/or get a grip on institutional press communication and want to understand their characteristics and potentials. It’s a good read even for those who have already done this job for some time and wish to enrich their knowledge. This is a book that provides analysis on developments in modern techniques, communication technologies and on the tools implemented by the Internet and the Web 2.0, all in a simple and easy to understand manner.

PressCom features in the chapter on corporate communication and media relations in connection with the solution adopted for the  MTS Merloni Termosanitarinewsletter.

For MTS we sent an email using an HTML text, accordingly translated into 11 languages ​​(Italian, English, French, Spanish, Greek, Turkish, Polish, Hungarian, Romanian, Czech and Russian), containing the links to the relevant articles. The result was to solve the problem of having to send attachments which were too heavy and at the same time allowing all partners to fully understand the message, especially those with little understanding of English. 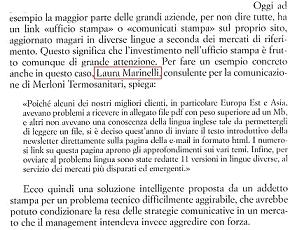 We, PressCom, are indirectly mentioned for a second time in the section of the book on House Organ. Fabio and Luca use the trade magazine  Azimut,  that we publish in partnership with the Association of Surveyors of the Ancona province as an example. On this occasion the two authors highlight  all the steps involved in publishing the magazine, from the editorial content to the advertising sales and graphic design, the latter created by a third party – to the printing and mailing of 2,500 copies.